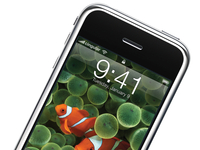 The next iteration of the iPhone, expected to be announced next week, could cost as little as €99 in some countries, and £100 in the UK.

According to analysts, Apple is expected to allow carriers to subsidise the device, which in turn will help it reach its goal of 10 million sold by the end of the year.

Ben Wood, a CCS Insight analyst, told the Times: "They are also looking for more flexibility on how the operators can price the iPhone, although I am not convinced that they will let them have open season on the price, as they have a lucrative iPod market to protect."

Apple has currently only sold 330,000 iPhone in the UK, France and Germany, so any kind of boost to that total will be much needed if it is to achieve its target.

When the first-generation iPhone was dropped by £100 by O2 earlier this year, sales increased dramatically, to the point of selling out in many places.

And although the UK operator has a multi-year exclusivity deal, Apple has seen its revenue-based plan deplete in the European markets, so O2 will need to keep an eye on how attractive the device is to the mass market.

However, if it can sell the improved device with a decent range of contracts, the carrier could well see an even bigger boost in sales when the device hits, likely some time in July.