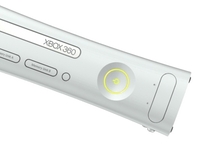 The new version of the Xbox 360 could launch at the E3 games event next month in a bid to halt the progress of Nintendo and Sony in the console wars.

According to Trusted Reviews, the new Xbox will be unveiled around 15 July, then scheduled for launch mid-August this year.

At the moment, this means the future is unclear for the current Premium versions of the Xbox 360, which have just 20GB of internal memory.

It's likely this update will be badged as a new product, but will eventually replace the 20GB version, as the cost difference between the two consoles is pennies.

Jon Hicks, Editor of Xbox 360: The Official Xbox Magazine says: "It's only a rumour at this point, but it's a sensible one.

"With more and larger content being released on Xbox Live, it makes sense for Microsoft to offer a bundle that takes better advantage of it.

"The real news, however, would be if it meant the end of the hard-drive-free Arcade version. If Microsoft started selling all Xbox 360's with a hard drive as standard, it would make life easier for the game developers - but with such a huge install base already, I'd be surprised if they went down that route."

Microsoft also has the Elite 120GB model, and given the push the company is giving HD downloads, we'd have to assume this will be the one to promote for that function, as HD and a few game downloads will eat up space faster than hungry, hungry hippos.