A farewell letter to Bill Gates 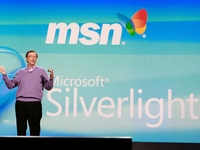 We know we've had a strange relationship over the years - sometimes you may have wondered why we were being so hostile to you and your Microsoft friends.

But on your final day we would just like to say 'thanks for the memories' and tell you some of the reasons why, as you reverse your car out of your Redmond parking space, there may be a little tear in our eye.

1. First and foremost we'd like to say 'thank you' for breaking the stranglehold of IBM back in the 1980s. Who'd have thought that their decision to hire your little company to create their PC-DOS would have such huge repercussions for the computing industry?

Your decision to keep the copyright really paid off right? MS-DOS opened up the market and helped bring the PC into the home.

2. And then there's Windows; dear, much maligned Windows. At one point around 1995 it really looked like you'd nailed it, but time waits for no man and things looked altogether more worrying when your first version of XP failed to cope with the security needs of internet computers.

Still, SP2 solved all that and security was the buzzword for Vista. Shame it didn't really cause any buzz, but fingers crossed for Windows 7!

3. We have to confess that we're a little worried about the state of the computer world now that you're taking your own brand of management with you into charity. That Jobs fellow is getting altogether too big for his boots and without you around to rein him in we're worried he'll end up as lord and master of the universe.

Still, the long-running battle with Apple, and latterly Google, has encouraged innovation and your failure to focus heavily enough on the net has opened out the online world.

4. While you were still heading up Microsoft it was altogether easier for us to ignore the fact you are the world's biggest philanthropist.

But now you're going full time into the Bill and Melinda Gates Foundation we're all going to have to avoid making eye contact with our fellow man because we just haven't given as much as we can to the tin-rattlers.

5. Before you came along, being a geek was possibly the lowest state of humanity, but although we're not entirely convinced that you were the driving force behind the geek revolution you were certainly part of the 'scene' and we've decided that you deserve some credit.

So as you ease off the handbrake and stick your car in reverse we'll be waving you off and wondering if there will ever be any individual who can be so intrinsically linked with the last decades of computer revolution.

So thanks Bill - and all the best in your retirement.

From all at Techradar.

PS. Please, please make sure you take the paperclip with you.