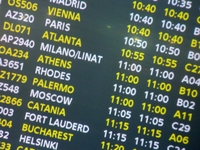 Delta Airlines is testing a new system allowing customers to check in up to 24 hours in advance via a mobile browser service.

Once the passenger has visited mobile.delta.com, an electronic pass will be downloaded to the phone with an electronic bar code, which can be scanned through the boarding process.

Handheld scanners will be used to verify the bar codes, and will help significantly speed up the check in and boarding times at the airport.

Techradar spoke to British Airways, which confirmed it is also interested in using similar technology.

"The potential for being able to use mobile phones to check in and as a boarding pass is just one of many potential avenues we are investigating," said a spokesperson for the airline.

However, BA did go on to say details of any such trial have not been finalised and will only go ahead should the preliminary investigations prove worthy.

The option could especially attract the business segment of the market, which is exceedingly looking for ways to save time.

Users can already check in using a mobile phone, but have to print out their pass at the airport. The new system will allow a completely paperless passage, which also has environmental benefits.

BMI is trialling a similar system in the UK, allowing those without luggage to bypass check in.

The service is currently only offered for internal flights, but could be extended further if successful.