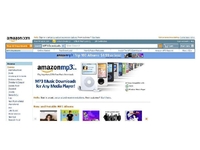 Senior bods from Amazon have reportedly been meeting up with UK music labels in a bid to sort out a UK version of its online music store.

Currently, Amazon MP3 is only available in America, but Amazon has already promised an international launch of the site in 2008.

The online retailer's music service launched in the US last year and has been a success mainly due to the non-DRM MP3s that are on offer.

Exclusive deals with the likes of Rockstar, where Amazon sold the music featured in Grand Theft Auto IV, has also made it a real contender against the daddy of online music, iTunes.

Stay tuned for more later this week, when we should finally have some concrete details for you on this important shift in the online music industry.