Apple's World Wide Developers Conference - what's it all about? 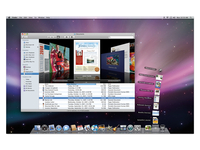 When Apple’s World Wide Developer Conference (WWDC) kicks off on Monday 9 June it will be unusually focused on just one product - the already iconic iPhone. But there’s a lot more to WWDC than that.

For going hand-in-hand with any iPhone developments, will Apple’s continuing efforts with a fast-growing community of third-party software developers, which include companies like Microsoft and Adobe.

This year’s event will arguably be the biggest ever with 150 sessions and labs covering every aspect of Mac OS X - the operating system that lies at the heart of the iPhone and iPod touch, Apple TV and Apple’s line of Mac desktops and laptops.

Since the latest version of Mac OS X - 10.5 Leopard - was only released last October, much of the emphasis will be on leveraging OS features like Multi-Touch, Xcode and Quartz.

Developers will also want to find out more about Core Animation - the graphics frameworks which enables Apple to create all those whizzy user interface effects in the iPhone.

Historically WWDC has also been a bit of showcase for Apple’s future direction. It was only three years ago that Apple shocked WWDC attendees by announcing a total switch from PowerPC to Intel chips.**Last year also saw the launch of Apple's Safari web browser on Windows.

Rumours suggest that this year’s WWDC will not only see the launch of iPhone third-party apps and a 3G iPhone, but also a heavily revamped and renamed version of Apple’s .mac web service; possibly even a Macintosh Tablet PC.

This year’s WWDC runs between Monday 9 and Friday 13 June and is already completely sold out. The 2007 version has 5,000 attendees. We expect there to be a significant increase this time around.