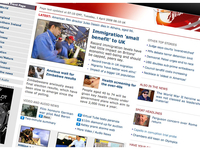 The BBC is planning to launch 60 local news video websites at a cost of around £68 million.

The plan is to launch the websites and provide on-demand video news for regions across the UK.

"BBC management believes the proposition will help the BBC to meet its public purposes and close the gap between the importance that audiences attach to the BBC's local role and their view of current performance."

The video will be optimised for mobile devices so that it can be accessed through the likes of smart phones, and files can be tagged, rated and shared by users.

Inevitably, the news has been met with opposition from local papers and news websites, who believe that the service will hit them hard.

The scheme will not launch until next year, with an initial four-week consultation period planned and provisional conclusions scheduled for November.