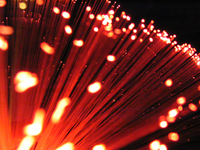 BT will invest £1.5 billion in installing fibre optic lines capable of 100 Megabits per second for its customers' broadband services, and hopes to convince Ofcom to drop its 'current barriers to investment'.

BT will finance the work by suspending its buyback of shares and potentially a raise in prices, and invest heavily in the fibre optic technology that allows much greater bandwidth.

The new fibre optic network will be available for BT's customers, but will also be sold wholesale so that other broadband providers can offer the service.

Fibre optic cable is already a reality in the UK with Virgin Media currently offering the service. Virgin is bringing a 50Mbps later this year and also trialling 100 Mbps lines.

The need for an improved infrastructure is becoming increasingly pressing across the UK which is lagging behind its European neighbours and miles adrift of the likes of Korea.

BT's focus on its broadband services is also heavily dependent on improved infrastructure, with the success of its TV on demand service BT Vision and the take-up of its new Home Hub - announced on Monday - reliant on new take-up.

My Satellite Setup
Has gone to a good home elsewhere

About time too BT you should be ashamed of yourselves, it is like waiting for paint to dry in some parts of Lancashire

Hmm, straight comparison with places like Korea are unfair, as in many cases the infrastructure in these countries would not have been there, so was installed from new with fibre, whereas in the UK, it is a slow replacement of millions of miles of copper cable.

My Satellite Setup
Has gone to a good home elsewhere

No what is annoying Rolf is that fibre optic cable has been here installed in this area for 12 years, (one of the first in the country I believe) owned by Shss you know who yet BT have only now realised that the infrastructure could not survive in copper format. Very poor foresight by somebody at the top if you ask me. Whilst hindsight is the easy bit, it was obvious all those years ago that the internet, voip and iptv, would land eventually, the problem is, now it has nobody can make full use of it if you stayed on copper. My 8mg connection once achieved 4 Mg but now runs at 2.2Mg and no faster
Share:
Facebook Twitter Reddit Pinterest Tumblr WhatsApp Email Share Link
Top