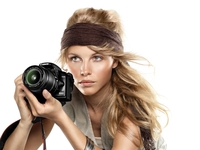 Canon has added toits expansive collection of DSLR cameras, with the EOS 1000D. Sporting a 10.1MPDIGIC III CMOS sensor, 2.5in LCD screen and a 7-point wide-area autofocussystem, the camera is aimed at those looking for a way into the prosumer marketwithout breaking the bank.

The cam sports a similar look and feel to the EOS 400D, but atjust 450g (body only) it is the lightest camera in the Canon cannon.

Some notable changes from the EOS 400D include a change ofcard memory – from CF to SD – and the addition of Live View, which was also foundon the EOS 450D earlier this year. The maximum shots you can take in Burst modeis up from just 27 on the 400D to a whopping 514 – something that’s sure toimpress wannabe paps everywhere.

Expect to see the Canon EOS 1000D hitting shops in July,just in time for a bit of holiday picture-taking.