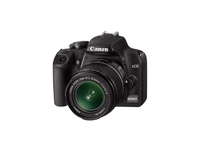 At an exclusive event in London yesterday, TechRadar managed to getits mitts on the new Canon entry-level DSLR, the EOS 1000D. In the brilliantsurroundings of the Getty Images Gallery we had a decent go with the camera andhere are our thoughts...

It’s light. That’s the first thing you notice when pickingup the Canon EOS 1000D. Without the lens, the weight of the body could bemistaken for a big-size compact camera, but it always feels safe in the hand,due mainly to the well-placed grip on the right side of the chassis.

The similarities to the 450D, Canon’s 12MP DSLR released inJanuary of this year, are plain to see. The control layout on the back of thecam is almost identical, with the exception of a smaller LCD screen (2.5in) andslightly bigger buttons.

The actual body, though, has gone through a redesign,making it look slightly slimmer and sleeker.

We were told by Canon’s productmanager that the size of the LCD is the reason that the camera is that littlebit lighter; now 450g without a lens.

The gubbins underneath has also been changed, slim-liningthe control options of the 450D for those new to prosumer photography.

Thefeatures that have been omitted include the automatic switch off of the LCDwhen you use the viewfinder – this now has to be done manually through the Menu– and one-spot metering.

There’s also a change in memory. Though the cameras we triedout were not equipped with memory cards, the cam now houses SD card rather thanCompactFlash, which the 1000D’s predecessor the 400D used.

Menu options will be familiar to all with Canon cameraknowledge and intuitive to those who never picked up a DSLR.

One of the newer options, as seen on the 450D is the LiveView mode. Flick to this and you can automatically focus on certain objectssimply be pressing and holding a button until a square on the LCD goes green. And it works. In our short test, aglass of orange that was originally out of focus, focused within seconds.

Depending on whether you choose JPEG or RAW, you can alsoshoot 3fps or 1.5fps respectively.

For a first-time DSLR buyer, the EOS 1000D looks likely tobe an ideal choice. The price is superb (£570 with an 18-55 Image stabilisedkit lens) and the responsiveness of the camera will impress users.

The abilityto link the camera up with all Canon EF and EF-S lenses and EX-seriesSpeedlites is also a boon.

Look out for our in-depth review of the camera in July, whenthe camera is officially released.