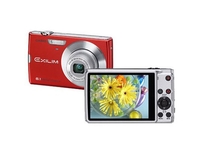 Casio has announced a new arrival to its EXILM range, the EX-Z150. This super-slim compact camera is reputed to be the world's slimmest (at just 20.1 mm thick) but still manages to pack a lot of goodness into its slender chassis.

For starters, the standout feature is the EX-Z150's LCD screen. At 3in this would be a large screen even for a DSLR, but on a compact it's positively gargantuan.

It's not surprising that this is the biggest screen Casio has added to its EXILM range. Add to this 8.1MP resolution and you have a shooter that's capable of big things.

Memory comes in the form of a full-size SDHC memory card. Those who forget extra memory will be pleased to hear there's 17.9MB of memory built-in - should keep you going for a few shots at least.

Those who want to try a bit of filmmaking will be pleased to know there's a YouTube capture mode that films 640 x 480 footage at 30fps, for up to 10 minutes per film.

Although the EX-Z150 has not had UK pricing and availability announced as of yet - it should be available in the coming months - when it does appear it will be available in silver, black red, pink, and green.