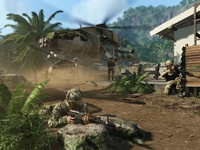 The future of gaming on the move just got a whole lot more exciting.

Just imagine playing World of Warcraft, Crysis or Age of Conan on themove with no compromise in gameplay from playing the same games on ahigh-spec PC at home. According to Intel this is no longer a dream anear-future possibility.

Intel demoed the latest streaming software by StreamMyGame at Computex in Taipei this week, which allows the latest high spec PC games to be streamed and played remotely on mobile devices, with NO compromise in gameplay.

WiMAX is the key

Games were demoed running on a powerful Intel processor-based desktop PC hosting which were then streamed and played remotely on a mobile device connected to the internet, made possible by a combination of powerful microprocessors and a fast WiMAX wireless broadband network.

"Online streaming of video and audio has radically changed the broadcast and mobile industries re-inventing the way consumers purchase and watch media," Intel states in a press release, adding, "StreamMyGame takes this evolution one step further."

The PC game's video and audio is captured in real-time and sent over the Internet to a remote device. The keyboard input at the remote device is sent back to the PC and used to control the game.

"We are entering a new mobile age where everything from video, audio, software applications and games can be accessed and played on the move" said Richard Faria, StreamMyGame's CEO.

"Our members can play games installed on their home PCs whenever and wherever they choose."

StreamMyGame can stream to both Windows and Linux including Ubuntu, Fedora and Xandros. To see more you can watch the webcast of Intel’s keynote online.