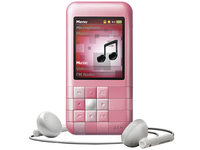 Creative has decided that just decent features in a media player aren't going to cut the mustard any more&hellip;now they have to look bizarre too.

The ZEN Mozaic (crazy spelling too&hellip;the kids will be down with this one) comes in 2GB, 4GB and 8GB flavours, with a 16GB version coming in the summer.

The 1.8 inch screen isn't really big enough to view videos on, though the capability is there. You can also view your photos on there if you've forgotten your phone, the device you probably took them on anyway.

The Romans would have been proud

The big selling point is the way the keys are melded into a mosaic (are you seeing what they did there now?), and comes in a variety of colours, with a speaker on the back to annoy people on buses.


The battery is tipped to last over 30 hours on a single charge though, which is almost reason alone to shell out £80 for the 8GB version, especially when there's an FM radio and voice recorder packed in too.