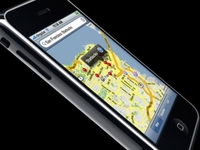 DoCoMo has admitted to TechRadar*it tried and failed to strike a deal with Apple to sell the 3G iPhone in Japan.

Speaking after Softbank announced it would carry the device there later this year - the first confirmed 3G iPhone - spokesperson Shuichiro Ichikoshi said: "The iPhone is attractive and appeals to certain Apple fans, so we have made efforts to introduce it but, as you know, Softbank has announced its deal today.

"Anyway, DoCoMo already sells touchscreen phones, such as the Prada phone and the SH906i, which came out yesterday."

However, as sales in other countries have proved, it’s not the touchscreen people want, it’s the logo and functionality Apple offer.

"Also, we already provide music and video services that make the most of our HSDPA network and we will be expanding those offerings."

Pressed on whether that's a definitive 'no' to a DoCoMo iPhone, Ichokoshi admitted defeat: "No - we will not be introducing the iPhone ... for now."

Japan is regarded as the hotbed of technological innovation, so to not have the device so far has been something of a mystery.

But now the country is getting the handset, DoCoMo must be cursing its failure, though it seems the handset might not be tied to one operator as it is in the UK and US, judging*from the final statement from Ichikoshi.