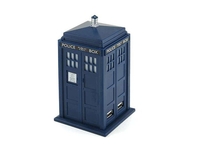 Mother’s Day? Easy. Flowers, chocolate, wine, Gordon Ramsay DVD boxset... sorted. Fathers, though – their stone faces hide their true desires. They might make polite noises about a new pair of garden shears or some extra bags for the vacuum cleaner, but really, they want just one thing – gadgetry.

Flashing lights, clicky buttons and whooshy noises delight any man – as do USB ports, solid state memory, MP3 playback and saving money on phonebills. The 15th of June is just days away now, but it’s far from too late to get a techy trinket sent daddy’s way. Here’s a few fatherly favourites for wallets of all sizes.

The sheer idea of buying someone a laptop as a gift will seem pretty obscene to a lot of people, but the trend for affordable super-portables brought about by the Asus Eee has changed everything. Just a nose over £200 buys a tiny machine capable of running Windows XP, browsing the web and watching DivX movies, and with an awesome battery life to boot. If you really want to spoil the old man, save up for the 901 model and its tiny titan Intel Atom processor. It’s twice the price, but has a much bigger screen and can handle high definition video. Warning: may not be suitable for the fatter-fingered gentleman.

It's increasingly tricky to find a pair of headphones that aren’t noise-cancelling these days. Nevertheless, there’s noise-cancelling and there’s noise-cancelling – or, to put it another way, there’s glorified earplugs and there’s active noise reduction. Rather than crudely muffling the outside world by squeezing uncomfortably into your ear canal, these over-ear cans use built-in micro-mics to electronically monitor and filter out persistent background sounds, such as the hiss and thrum of an aeroplane or the whistle of an open train window. Coming from high-end headphone specialists Sennheiser, the sound quality’s significantly better than the average bear too, so they’re a smart pick for an audiophile dad. They’re expensive, but it really is a world of difference from earplug models.

There isn’t some magic switch that flips when a guy becomes a dad, seeing him abandon a) his wish-dreams of rock stardom and his fascination with toys and games overnight. Let him know it’s okay. Reassure him that there’s nothing wrong with joyously geeking with a plastic guitar. Show him you’re not embarrassed by his inner child. Buy him Rock Band.

He’ll need either a couple of mates or four extra hands to make the best of it – co-operative play with someone each on guitar, vocals, drums and bass is what Rock Band is really about. However, it’s eminently playable as a solo game – pick your instrument of choice and carve out a career playing just that. On the one hand, it’s just hitting coloured buttons in time to music and on-screen prompts – on the other hand it’s the joyous pomposity of rock concerts in your living room.

So much data. Boring, boring data, about business accounts and client contact details and giant PowerPoint presentations. Still, just because the contents of your Dad’s portable hard drive might sap his will to live doesn’t mean the hard drive itself has to be a monolithic misery. Up to 320GB of storage lurks inside something not much bigger than, well, a passport. There’s a bunch of different colours available, so you can be sure to give your dad something that matches his favourite tie. It’s entirely bus-powered too, so it’s also ideal for toting around a crapload of music, movies and games to supply entertainment to a laptop saddled with a lame 40 or 60GB internal drive.

Serious PC gamers need serious mice. Logitech have long held the performance rodent crown, and while the G9 might controversially ditch the wildly successful shape of the G series to date in favour of a chunkier aesthetic, its precision simply can’t be argued with. If your dad’s into lengthy bouts of Counter-Strike or Unreal Tournament, his frag count will be given a serious leg-up by a super-responsive mouse like this, while a World of Warcraft obsessive will find it a more comfortable hand-fit than his boggo rat. The removable frames, intended to give the mouse different weights and ergonomics depending on whether you’re using it gaming or desktop work, might be a gimmick too far, but they certainly bring luxury sensibilities to a peripheral that’s so often dismissed as humdrum.

It’s easy to forget amidst all this fevered frothing about iPhones that there are other MP3 players in the world, and that you don’t need a phone, GPS, the internet and Super Monkey Ball to listen to Pink Floyd in the gym. A tiny amount of poundage buys an even tinier player from Apple’s major rival, Creative – this sleek, pebble-sized gizmo can hold 2000 songs and still have room for a screen, an FM radio and voice-recording. Even in this day and age, 4Gb for £40 seems incredible – so much so that your papa will doubtless believe you’ve spent a far vaster sum on him.

Even if you discount environmental concerns about wall-charging a half-dozen gadgets every night, there’s a purely practical reason to own a solar charger for your MP3 player, phone, GPS and the like. It’s tricky to recharge them on the move, and almost impossible if you’re off camping or to the beach. The pocket-sized Freeloader comes supplied with a raft of adaptors sufficient to cover most portable technology, which also means the holiday luggage won’t be crammed with quite as many different cables as it used to. Dad’ll need a decent amount of sunlight and the patience to wait several hours until his devices are charged, but just think how chuffed he’ll be that refilling his iPod’s battery isn’t costing him a penny.

Tech-saviness may be the mark of the 21st century man, but there’s no need to keep traditional bloke-hobbies separate from all that gadgetry. This Swiss Army Knife-alike has a serviceable 4GB memory stick alongside its handy blade and scissors. It’s perfect for those moments when you need to skin a rabbit whilst simultaneously transferring some Word documents to another PC. Alright, that never happens. But it might – and think how much your Dad would love you for buying this for him if it did. If you want to be all official about it, Victorinox do offer genuine USB-enhanced Swiss Army Knives, though sadly their capacity currently tops out at 512MB. Alternatively, gaffer-tape a dinner knife to an iPod and have done with it.

It might be ostensibly a kids’ show, but Doctor Who is terribly important to British males of a certain age – those that grew up watching the show with their own fathers in the 1960s-80s. Of course, it would be terribly childish for them to buy remote control Daleks or toy sonic screwdrivers, no matter how much they might want to. But what about when the fanboy stuff has a practical use too? This cheapie Tardis could be the best of both worlds. No-one strictly needs their USB hub to look like a time machine, but you can guarantee daddy dearest will get a quiet thrill from plugging his iPod into a Police Box.

Another way to any father’s heart is through his wallet. If yours unleashes a torrent of invective at every new phone bill, Skype will likely change his life. As will muttering into an unwieldy headset and mic – but not for the better. There’s a huge array of VOIP phones around, some of which go for silly money because they’re packed with silly features. Honestly, do you really need an LCD display when the thing’s attached to your PC anyway? Less than £15 nabs this stylish Freecom model, which instead of pretending it’s some self-contained ultra-tech actually makes a virtue of being a PC peripheral – it’s super-light (so ideal for carrying around with a laptop) and distinctively designed.