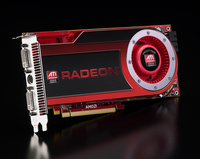 July 2008 was the month that the graphics card industry took another big leap forward. Nvidia launched a new range of 200-series cards, with the record-breaking GeForce GTX280 leading from the front.

But ATI has been busy also, and has likewise launched a new batch of supercards. The interesting thing is that ATI and Nvidia have both taken very different routes with their new generation of graphics chips.

Nvidia has gone for brute force - the GTX280 is the most powerful graphics card ever created, with the cheaper GTX260 not too far behind.

ATI on the other hand, has decided to go down the 'value for money' path. Its new 4000-series cards are clocking in at speeds just below the Nvidia ones, but crucially they cost a hell of a lot less.

The GeForce 8800GT is a stonkingly good graphics card. When it came out last year, it offered performance just a fraction underneath the 8800GTX for a fraction of the cost.

It has 112 stream processors - each of which is individually clocked at 1. 5GHz - plus a 256-bit memory interface running at 900MHz.

And while the 8800GT is designed for PCI Express 2.0 (offering 5Gbps throughput), it's backwards compatible with original 2.5Gbps PCI Express slots too. The 8800GT was also the first 65nm GPU that Nvidia produced.

This more efficient process technology not only shrinks the size of the circuitry but reduces the overall power consumption. You can get this card for under £100 now which is phenomenal value for money. Beware the horrendous 256MB versions though - it's 512MB or nothing for this card.

The 9600GT is a relatively low-budget graphics card that makes the others in the sub-£200 market all but redundant.

The gaming performance is on a par with the G92-based 8800GT, dropping a few frames per second here and there, but never enough to really make a difference to the naked eye at standard resolutions.

Of course, if you're driving a very hi-res panel at 2,560 x 1,600 then you're going to have trouble getting smooth framerates at the native resolution, but if you're willing to pay out for such a mammoth screen then you'll be able to afford at least two of these, or a more expensive card.

Compared to NVIDIA's 8800GS and the awful 8800GT 256MB version - both of which are still retailing at well above the cost of the 9600GT - this card walks all over them.

You'll spot this latest version of the GeForce 8800GTS card because it nominally carries 512MB of memory on board - not unlike the 8800GT.

Inside its silicon heart there are yet more similarities with the GT: it's based, for example, on the G92 core.

In brief, G92 is a refined version of G80, designed on a 65nm process with a more polished instruction issue engine and capable of much higher clockspeeds. It also features the Pure Video 2 engine for improved HD decoding.

To earn its extra consonant, the 8800GTS has the full complement of 128 stream processors previously seen in the 8800GTX and Ultra cards, and thanks to the difference in G92 architecture, it has double the number of texture address units that those cards boasted.

On paper then, it's a superior card in every manner - from clock speeds to shader counts - to every previous NVIDIA chip.

However, if you go for this card you need to make sure you don't buy one of the older versions (which had 640 or 320MB of memory) - unless you're getting a significant discount.

In fact, it might just be the most efficient, effective and elegant graphics chip that the world has ever seen. It certainly delivers a bigger bang for your buck than any graphics chip before.

And yet it is not quite the fastest. It's actually quite tricky to choose a direct competitor, since the arrival of the 4800 will inevitably push prices of existing graphics chipsets from NVIDIA down.

The new Radeon HD 4800 comfortably has the measure of its closest competition - the GeForce 8800GTS. OK, it's not the most powerful GPU on the planet.

That honour remains with NVIDIA's GeForce GTX 280. But at around £450, the GTX 280 costs over three times as much as the 4850. A brilliant card at an absolute bargain price.

Nearly two years ago, the much-heralded age of the DirectX10-capable graphics card dawned, as the supreme G80-powered GeForce 8800GTX dropped into the TechRadar office.

We had to wait 12 long months for a refresh, during which time we were treated to a mass of mid-range cards, including the excellent 8800GT.

And while the 9800GTX and its GX2 uber-sister were extremely powerful cards, they were by no means the giant leap forward we were hoping for.

The long and short of it is that if you've got yourself an 8800GTX or Ultra, and felt that twinge of envy at the announcement of this new generation of top-end cards, then you can stop worrying.

In fact, you can probably be down-right smug as your slightly geriatric cards are still more than capable of holding their own against these youngbloods. The 9800 cards are good, but in terms of their place in the market, stillborn is the only way to describe them.

If you still want one though, try this:
PNY XLR8 9800GTX Overclocked

The GX2 follows the example of the old 7950GX2, strapping two G92-stuffed PCBs together. But this time both PCBs face into the same heatsink and are housed in a vaguely coffin-like surround.

The clock speeds are slightly slower than the GTX, but a fair bit of optimising has gone into making this single-card SLI offering an impressive piece of engineering.

The GX2 is more powerful than the GTX, mainly due to its brute force SLI set-up. Still though, there's no real reason to pay the money.

The brand-new GeForce GTX260 is about £50 cheaper than the 9800GX2 and yet throws out pretty much identical figures. That's pretty impressive for a single-GPU card.

The GTX260 is most impressive at the ultra high-end resolution of the 30" monitor brigade. We were disappointed with the performance of the GX2 at 2560x1600; after all we were expecting all that bandwidth and GPU grunt to shunt around pixels on a 30" display with mature content abandon.

The GTX260 proved to be no hi-res slouch, doubling the GX2's Crysis performance. The real problem with this card though, is that Nvidia kinda stole its own thunder. If it hadn't bothered with the 9800 cards, the 260 would have seemed much better. However, it is a step up, and at a fairly decent price.

Try this one:
Zotac GeForce GTX260

But the 4870 has an even better party trick. It makes the latest uber-GPU from arch rival NVIDIA, the GeForce GTX 280 (below), look massively overpriced and just a little bit silly.

The really clever bit is how ATI has managed to up the shader and texture count by 150 per cent courtesy of a boost in transistors of just 40 per cent.

And the good news is that there is little reason to pay the £400 NVIDIA is demanding for the GTX 280. Incredibly, ATI has come up with a GPU that delivers a remarkably similar gaming experience for half the price.

And finally, here is the Nvidia GeForce GTX 280 - the fastest, most powerful graphics card on the planet. In terms of performance, nothing beats the GTX280 - so if you want the best, this is the one to get.

However, value for money is one thing this card cannot offer. The ATI Radeon 4850 is less than a third of the price of the GTX280 and doesn't lag terrible far behind in terms of gaming benches.

Still, the GTX280 finally delivers on the promise of high resolution DX10 gaming, even if it still refuses to support DX10.1. It is an excellent card, but we can't help but feel it's a little over priced.

Try this one:
Gigabyte GeForce GTX280