Exclusive In Depth News Feature: Bungie: E3 was a success 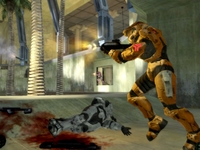 Feted Halo-developer Bungie was denied the opportunity to show off its latest game project at this year's E3 at the last minute, leaving gamers worldwide chomping at the bit for more info on what comes after Halo 3.

TechRadar spoke with Brian Jarrard, Community Lead of Bungie Studios to reflect a little more about this year's E3.

What did Bungie think of the major E3 announcements from Sony (Home, trophies), Nintendo (WiiSpeak and Wii RemotePlus) and Microsoft (Xbox experience, avatars)?

"At the moment, Bungie has already embarked down a path for our next few projects so none of the recent E3 announcements will really impact what we're doing, at least not for a while," says Jarrard.

"However, as a studio that has always put a lot of effort and focus into the online and social elements of our games, we're watching closely as all three platforms do more to grow and evolve that part of their experience."

E3 is a success

What of E3 as a whole? Does Bungie feel that the show still has a valid role?

"For Bungie itself, I wouldn't necessarily say E3 was a "success" in terms of our initial plans and goals going into the show," says Jarrard, which might be described as something of an understatement.

"However, I can comment on the overall show as an attendee and member of the industry," he continues.

"E3 seemed to be much better run this year compared to last, even if it did feel fairly devoid of the usual throngs of people it once attracted. Walking through the LACC and literally seeing a mere dozen or so people in the lobby was quite telling.

"However, of those who did attend - both developers and media - everyone I spoke to felt very good about the show. I think the best word to describe E3 as a whole this year is efficient.

"It was easy to show off games and to play games, to talk to media and to talk with developers. There was far less glitz and glam and certainly far less bodies, but in the end the products took center stage and E3 seems to have done what it needed to do - at least in the U.S."

"Personally, I do think the industry itself could still use something a bit more high profile, more prominent, more of a spectacle, and I think you only get that when you infuse some degree of consumer involvement (see Leipzig Games Conference, Comic Con, PAX, and so on...)," admits Jarrard.

"The media aspect of E3 seemed solid though - developers having quaint, quiet meeting rooms with scheduled media appointments to review games is great.

"However, as a developer we also enjoy an opportunity to get hands-on with the people who actually purchase our games."

What of Jarrard's personal favourite moment of E3 2008?

"Hmm where to begin&hellip; hijacking the digital white boards at the MSFT keynote and writing "Love, Bungie" for the capacity crowd to see was definitely a high point - more so considering the surprising last minute change that resulted in Bungie having no actual role in the keynote and then later having our subsequent plans changed as well."

In what might seem a surprising move for some, the man from Bungie is full of praise for Sony and Electronic Arts.

"I thought the EA press briefing was great - their focus simply on games, presented by the people who make them, was very refreshing," says Jarrard. "Bill Walton and Peter Moore's on-stage antics became an instant classic."

"Walking through the EA and Sony briefing in full Bungie garb was great for a variety of reasons. Little Big Planet was a personal favorite of mine, and the way they used it in the Sony keynote was awesome."

Overall, Jarrard notes, "it was just great to walk around the show and attend the various social events as an independent developer and meet and mingle with friends and colleagues all over the industry. And as a hardcore gamer at heart, it was awesome to see some truly imaginative, inventive and technically impressive games coming later this year."