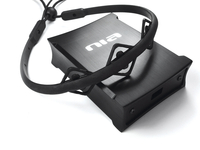 Mind-controlled gaming could be on its way to the Sony PS3, Microsoft Xbox 360 and the Nintendo Wii. OCZ's Neural Impulse Actuator interprets electrical signals from your brain in order to input commands into a PC.

Using this device, you can play games like Crysis and Unreal Tournament without using your hands.

And now it seems as though the same technology might be developed for use with the top three games consoles as well.

OCZ on the case

In a meeting today with TechRadar, Tobias Brinkmann - director of marketing at OCZ - told us that the company is actively looking into the possibility of developing the NIA for use with the leading consoles.

"It's definitely something we are looking into," he said. "The thing we think would be most cool is to get the NIA working with the Nintendo Wii - that would be good. But of course it would be great if we could get it working with all the consoles."

Brinkmann revealed that in the past Microsoft has attempted to acquire the NIA technology from OCZ, but the offer was turned down flat. Microsoft has clearly seen the potential that this technology has.

The future of gaming?

It would certainly make a lot of sense for OCZ - better known for its high-speed computer memory - to develop the NIA for games consoles. Although PC gaming is still going strong, the force is well and truly with the consoles at present - it's a multi-billion pound industry.

And what with the Nintendo Wii being the best-selling console, and the fact that the Wii is actually the most basic platform out there, it makes sense that this would likely be the first console that the NIA might be developed for.

Read our review of the OCZ Neural Impulse Actuator (NIA)