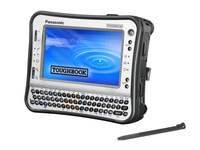 As promised yesterday, we were able to twist a few arms at Panasonic's Japan office to bring you the world's first hands-on preview of the company's new CF-U1 Toughbook PDA/Tablet PC hybrid, a full four months before it goes on sale.

The latest small device to be powered by Intel's Atom processor landed with a thud on our desk this afternoon right on cue, suggesting that it might be slightly heavier than the 900g we predicted yesterday.

In fact, the chunky handheld weighs just over 1kg (1,060g), making it comparable to a typical subnote in terms of weight, in spite of its myriad USPs (that's 'Unique Selling Points' in the real world, BTW.

Where it really differs, as you can see from the photos of course, is in its construction. Panasonic has taken the Tablet PC concept and beefed it up with IP54-standard protection against dirt and water - it can survive the heaviest grime attack and being sprayed with water.

On top of that, it has a 16GB solid-state drive (SSD) instead of a spinning hard drive and drop protection that's guaranteed to handle a 120cm fall onto a hard surface. The other major build change to what has gone before is a full QWERTY keyboard to complement the touch-sensitive screen.

The 1,024 x 600-pixel screen also incorporates a polarizing filter that makes it readable even in direct sunlight. Otherwise, there's support for all flavours of Wi-Fi (including draft 802.11n), Bluetooth 2.0, optional barcode and fingerprint readers, GPS and camera if they're needed.

As should be obvious from that lot, the U1's target user is the modern construction-site manager or anyone working in an environment that's likely to have a normal PC in fear of its life. This is clearly not a computer for the sedate stay-at-home user.

Nevertheless, the very consumer-oriented Atom is at its heart and that's what makes the U1 different from other rugged field devices. Aside from offering substantial battery life - more on that shortly - it's also powerful enough to run a standard PC operating system.

Panasonic has wisely chosen to offer both Windows XP and Vista (Business Edition), explaining that on-site workers can now take their office with them, instead of having to make do with simpler mobile platforms.

Whether that makes a big difference or not to likely users, we can't say - we don't have a handy building site for a field test - but we can evaluate what the U1 feels like from a more general point of view.

Getting our hands dirty

As might be expected, the U1 feels virtually indestructible in the hand. We actually dropped it several times with no noticeable effect to its operation, showing that the SSD and the other ruggedised components do their job as advertised.

Waterproofing clearly works, with even a dunk in the sink not a problem on this evidence. We'll take Panasonic's word (and that of the international standard IP rating) on the dust-proofing.

Although the machine is almost 6cm thick and weighs a full kilo, the sturdy hand strap works well, taking the load off effectively. It's similar to the strap on most camcorders and slips over the back of the hand to leave the screen pointing at the user's face.

From that position, using both hands on the keyboard is obviously impossible, but it's too wide to be used as a thumb-board and the buttons are too small for normal typing anyway.

The feeling we got was that the keyboard is really secondary to the screen, which is probably why a number-key-only option is available in Japan, at least.

As for that display, 5.6 inches is not exactly massive, but it's just large enough to see icons and text at normal size. Should enlargement be needed, there are zoom buttons just to the left of the screen.

Above those, there's a pair of scroll buttons for paging through multiple screens and a trio of LED indicators showing if the Wi-Fi is on or off, the presence of a second battery and SSD access.

Over on the far side of the screen we have a recessed power switch, four hotkeys for pre-assigned applications and three more indicators keyed to the first battery and various power-related functions.

Astute readers will have spotted that we mentioned two batteries - these can be hot-swapped to eliminate downtime, which is going to be one of the U1's biggest selling points. Sticking a battery in each of the dual bays raises the operating time to a maximum of 10 hours, which is impressive.

Naturally, the Atom CPU plays a major part in power management, but the Z520's 1.33GHz clock speed isn't going to allow users to run many power-hungry applications simultaneously. Also, an upper RAM limit of the pre-installed 1GB might be too restrictive for power users.

Nevertheless, in normal use we found things running smoothly with a browser and a few other simple apps open, which is about all that is likely to be asked of the U1 in the real world anyway. It comes with little else pre-installed.

Even though this isn't a machine that's going to be purchased by individuals, the price has to be mentioned. Panasonic told us the U1 will cost the local equivalent of around £1,250 when it launches on October, which isn't cheap.

Overall, this latest Toughbook is an impressive showcase for both Intel's Atom and Panasonic's engineering nous and we fully expect it to do well in its intended market and to spawn plenty of imitators - the most sincere form of tribute, after all.