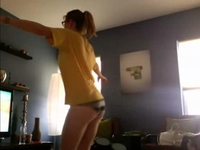 *A video of a girl hula-hooping on Wii Fit, "secretly" captured by her boyfriend, has garnered over two million hits.

Boyfriend Giovanny Gutierrez - who wittily posted the video with the comment: "This is why I love Wii Fit. ‘Nuff said" - has maintained he doesn’t work for Nintendo, as some have labelled the vid as viral marketing.

He said on an LA Times blog: "She loves Wii Fit — and even more, looks hot doing it.

"She was furious and called me on the phone screaming her head off and then hung up on me.

"But now finds herself actually laughing about it and enjoying her 15 minutes of fame."

Included in the comments to the gyrating female was this gem from user martinceronr: "OR you could just get a good girlfriend and ask her to do that for you. No need for stupid Wii."

Always nice to get a bit of perspective.