Hands on: Acer’s Atom-based Aspire One 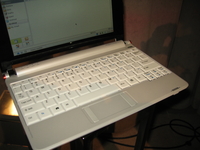 We got hands on with Acer’s new Intel-Atom boasting ‘netbook’ in central London today. The mini notebook is undoubtedly a key competitor to the Asus Eee PC as well as MSI’s newly-announced Wind – which is also Atom-based.

The new machine does have something of an identity crisis – Acer is calling it a "mobile internet device" when others are calling similar laptops sub-notebooks, micro laptops and suchlike. There certainly seemed to be some discrepancy between Acer’s label for the machine and Intel’s descripton of it as a ‘netbook.’ Acer has even sent us a ‘positioning document’ that says "the Aspire one is an all-new communication device designed to provide a true mobile and wireless experience through continuous access to the Internet no matter where you are." Nice.

But, marketing claptrap aside, the Aspire One looks like a formidable prospect, especially given its £199 price point for the 8GB Linux version with 512MB of RAM. Acer has engineered a bespoke interface, rather like Asus’ for the Eee PC. Open Office is offered, as is a Messaging app that can handle MSN/Windows Live, AIM, Yahoo and Google Talk. Likewise an integrated email app can handle various accounts including Google Mail, but not Hotmail.

Windows XP Home is also an option (£299) but Acer only had the Linux Lite version available for us to look at during this morning’s launch. The uprated Windows XP option provides 1GB of RAM with an 80GB hard drive. Various models will be available, including a version with 7.2Mbps HSDPA. Acer was also talking up WiMAX, but we all know its appearance in the UK will be long and drawn out. 802.11b/g Wi-Fi is included as standard – part of Intel’s 945GSE chipset.

The Atom N270 chip is the Diamondville variant (Silverthorne is for UMPCs and MIDs) and runs at 1.6GHz with a thermal envelope of 2.5W. That’s the top end of the spectrum for Atom, which doesn’t need a fan.

In terms of weight and size, the Aspire 1 is just over 1KG and is more-or-less perfect for a train-top table. It’s still an 8.9-inch display, though Acer plans some bigger-screened models in future. Other notable features include an SD slot for expanding the memory as well as two available batteries – a 3-cell that Acer says promises three hours of battery life as well as a 7-cell for a pretty impressive seven hours. Take some time off this if you’re buying an XP-based variant.

The Aspire One will make an impression on the market, that’s for sure. The £199 Linux offering is impressive and pound-for-pound the XP version is better value than the MSI Wind. Acer clearly wants to make an impact – the company will hope the Atom will give the Aspire One the springboard it needs.