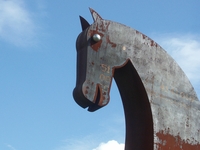 It's only something that true fans of The Simpsons will understand, but a little in-joke from the show is causing chaos on the internet.

For the uninitiated, Homer in one frankly hilarious episode - 'The Dad Who Knew Too Much' - was seen to have the email address of chunkylover53@aol.com. You see what they did there?

In a stroke of genius, one of the writers on the show registered the email, and actually answered fans' queries from time to time.

Now Chunkylover53 has turned against its makers and taken on a life of itself as a distributor for the Trojan virus.

The email is now sending out auto replies to people who email it, pointing them to the direction of a downloadable 'brand-new, unseen' Simpsons episode.

The only problem is, it's not - it's actually a link to the Trojan virus which will crash your computer, slow it down and generally cause a bit of a nuisance.

Speaking about the new Trojan/Simpsons hybrid, Chris Boyd, malware research director at FaceTime, said: "For now, this is a good reminder to be cautious when randomly adding cool things seen on TV and film to your online applications."