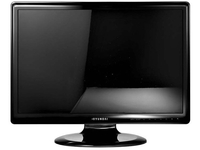 The latest company to embrace 3D technology for the home isHyundai who has just announced a new range of TVs that take you to anotherdimension.

The 22in monitors are catchily titles W220S TriDef 3D LCDand house some reasonable ‘normal’ TV specs. Included is 1680x1050 WSXGA+resolution and 1,000:1 contrast ratio, both of which could be better in ourbook if it wasn’t for the fact that these screens have a little thing called 3Dto rely on.

To appreciate the full impact of the telly, you have to donsome pretty nifty specs – which actually look like an average pair of sunglasses.

Once the glasses are on, your perspective will change. Andthere’s no need to go out and buy expensive 3D things to watch either asbundled in the package are a load of apps that take advantage of thetechnology.

What you get is Google Earth 3D, a pair of 3D games. Oh, and a TriDefmedia player for 3D video content. And you thought the company just made cars.Shame on you!