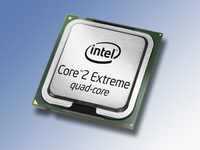 Intel is defying the global credit crunch, with reports of a 25 per cent jump in profits in the three months to the end of June.

The world's largest chip manufacturer is the first major tech company to report its second quarter figures and an income of $1.6 billion - around £798 million - is a major increase on last year's figure of $1.28.

"As we enter the second half, demand remains strong for our microprocessor and chipset products in all segments and parts of the globe," said Paul Otellini, Intel president.

Although high street spending is down, the growing desire for laptops has kept things buoyant for Intel.

An increase in the low-costs sub-notebook market like Asus' Eee PC has meant Intel selling increased numbers of cheaper chips like its new Atom, but this has not been especially detrimental to profits.

It's capped a fine week for Intel who released their Centrino 2 chip to much fanfare on Tuesday, and with Atom also doing well, it's a good time to be in chips.