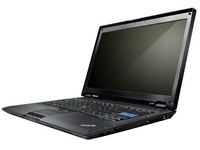 Notebook manufacturer Lenovo has teamed up with Vodafone and Ericsson to offer notebooks with in-built 3G connectivity for no extra cost.

The program from the three companies means consumers and businesses will no longer have to pay a premium to have an 'always on' broadband connection, where previously it cost up to £100 more to have such technology in a laptop.

Customers will be able to purchase new ThinkPad notebooks in the performance T and ultra-portable X Series and on all of Lenovo's new ThinkPad SL Series notebooks.

Lenovo says it designed the three ThinkPad SL notebooks for the small-to-medium business users, as they are looking to be connected when WiFi hotspots aren't available.

For those unfamiliar with how 3G connectivity works, Vodafone is offering a 30-day trial when the new laptop is purchased, and the user can opt to continue when the service ends.

The module will also be replaceable as and when the technology advances to provide higher speeds, though Lenovo believes it will be adequate for at least three years.

Mobile broadband has become something of a buzzword for the mobile networks, so should this series, launched on the 4th August, prove popular, it could be a major coup for Vodafone.

Or you can buy a broadband USB dongle and attach to your old-school laptop.

My Satellite Setup
No satellite stuff for the moment (aside from a 43cm minidish that was on the house already), Samsung SyncMaster T27B550 Smart TV & Monitor, and a few computers...

mhku said:
Or you can buy a broadband USB dongle and attach to your old-school laptop.
Click to expand...