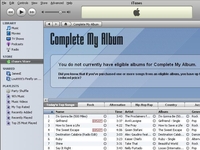 It's a tried-and-tested piece of marketing - give people a taster of something so that they come back and buy the whole product. Finally the music industry, via iTunes, is cottoning on to the idea that this may work when it comes to digital download sales.

Companies are using iTunes to release multiple tracks from an artist from an album before it is even released. Not just the occasional single, but a good chunk, so that users can sample what the album will be like before they purchase the full product. Once the album is officially released fans can purchase the remaining tracks at a discount through the Complete My Album option; usually the price of the album with cost of the single tracks deducted.

A notable winner of this type of marketing has been, according to Reuters, Li'l Wayne. The American rapper notoriously known for releasing free mix albums and downloads through the internet, put up six of his tracks on iTunes a couple of months prior to the release of his album Tha Carter III.

Given that that album clocked in at 18 tracks, this meant that a third of it was already on iTunes for people to sample. This lead to 100,000 people buying the album digitally (around 10 per cent of actual sales), a whopping 52 per cent of these sales coming through iTunes Complete My Album.

Speaking about the Complete My Album feature, Universal Motown senior vice president of digital business development Cameo Carlson said: "For artists that have multiple tracks out, if the album is solid and there's an offer that makes sense to consumers, they will use it."

Complete My album was introduced in the UK iTunes store last March.