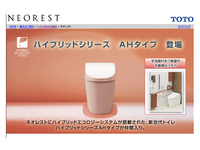 When it comes to writing about Japan it's amazingly easy to get carried away and overstate the case, ending up with a twisted portrait of a mostly ordinary country that instead looks like Disneyland on acid.

And we've all seen, TV shows about the place struggle to strike a balance between entertainment and sensationalism. Some, like Adam and Joe Go Tokyo succeed (mostly); others, such as Jonathan Ross's Japanorama come across as attention-seeking 'Aren't they peculiar little Hobbits' ego trips.

Fortunately, when it comes to our corner of the world - gadgets and gizmos - we don't need to do much sensationalising to bring home just how odd some Japanese tech toys really are.

So, read on for a fun-filled whizz round five companies responsible for some of the oddest (and most popular) devices money can buy.

Bringing up the rear, if you will, we have Japan's largest toilet manufacturer, Toto, from Kitakyshu (ok - we cheated; they're not all in Tokyo).

Named after either an abbreviation of the Japanese for 'Oriental Porcelain' or Dorothy's dog in the Wizard of Oz, Toto is all-but ubiquitous in Japan and even has subsidiaries in the US, China, Indonesia, Thailand and Vietnam, making it the world's fourth-largest purveyor of toilets.

If you've been to Japan, you won't need us to tell you why Toto's products are a little unusual. You'll be all-too familiar with the famous Washlet brand of electric seats with more functions than most TV remotes.

A typical modern Washlet - they've been around since 1965 - includes a bidet with an adjustable-position spray nozzle (work it out), heated seat, blow dryer, water massage option, odour absorber and a sensor that automatically opens the lid when anyone approaches.

All these functions are controlled from a button- and light-laden electronic panel that's either to the side of the throne or on a separate wireless unit. Yes - these toilets have remote controls.

By far the smallest company on our list, Cube makes the No4 slot by virtue of selling the most pointless PC accessory we've yet to see. The Tokyo firm's USB Humping Dog does precisely what it says on the pack.

Plug it into any free USB port and watch it demonstrate how much it loves your computer - physical love in a very canine way, we mean.

Aside from executing more hip gyrations than Elvis in his prime, these electronic mutts do absolutely nothing else. Yet somehow they became the big stocking-stuffer hit of Christmas 2006, selling by the truckload for around £10 each.

Mind you, Cube has plenty more up its sleeve, including a USB chameleon with boggly eyes and flickering tongue, a self-destruct button that fakes a PC fate worse than a BSOD and a USB hub that doubles as a miniature replica petrol engine ("You can enjoy powerful vibration and big exhaust sounds!").

Maywa Denki may seem like an odd choice, as it's not really a normal electronics firm. Instead, it's an art collective that dabbles in everything from music performances to robotics exhibitions.

Founded in 1993 by brothers Masamichi and Nobumichi Tosa, Maywa is best known for the very limited runs of electrical devices called 'Nonsense Machines' that it sells at irregular intervals.

Most famous in Japan is the Knockman Family of tiny robot-like figures that do little more than bash each other (and themselves) on the head.

Something inherently cute about self-flagellating machines made these critters the talk of the internet in 2003.

Slightly more useful is the 'Fish Cord' - one of the only other Maya Denki pieces to go on sale outside their boutique/workshop.

Not content with simply joining A to B, the blue-coated Maya boffins gave the electrical extension cord a fish's skeleton, complete with tail, skull and glowing eyes.

Fittingly for a band of 21st-century geeks, the Maywa crew promote their work by giving electronica concerts - they call them 'product demonstrations' - releasing DVDs and appearing on late-night TV to talk about the avant-garde philosophies behind their creativity. Let's see Sony or Panasonic try that.

Looking at the riot of colour and kaleidoscope layout of Strapya's website, you'd never guess that the Kanagawa firm is Japan's most popular merchant of mobile-phone accessories.

Starting in 1998, Atsushi Higuchi's forerunner company to Strapya began by selling tiny cartoon characters and the like for dangling from the then newly popular mobile phones the nation was touting with abandon.

Within months, the company was counting its revenue in the millions and beginning an expansion that few could have predicted.

Today, Strapya goodies are made by a host of third parties. They can be bought everywhere from eBay and Yahoo in Japanese to bricks-and-mortar shops and 15 different online mobile-phone stores in English too.

Strapya president Tomonari Higuchi explains: "We do business with over 400 Japanese toy manufacturers, factories and distributors.

"Some are big and internationally well-known companies while some others are very small and a few are at craft-worker levels."

That diversity is important as it means Strapya "can get almost all sources available in Japan for mobile accessories, toys and gadgets," says Higuchi. Still, some of the best-sellers might appear a little baffling to most outside observers.

Currently riding high in the Strapya sales chart is the 'Endless Edamame', a rubber bean pod that expels tiny soybeans with faces when squeezed and the 'Electric Bubble Wrap Key Chain', which is fake bubblewrap that can be popped again and again and again&hellip;

Best of all, though, is the 'Lucky Golden Poo' - a shiny golden charm in the shape of a, well&hellip;, with a face and a million sales in Japan to its name.

Regular readers will know that the top rung on the ladder of wackiness simply had to go to everyone's favourite merchant of the bizarre, Thanko.

The Tokyo gadget vendor was founded in 2003 by Hiroyasu Yamamitsu as an online-only shop and has now expanded to three real-world stores, including one in Osaka.

Although Thanko is well known for products that most sane individuals would take as a joke - the cooling necktie with a USB-powered fan and the anti-hayfever USB facemask spring to mind - the fertile minds there assure us they're not kidding.

The company's Ernie Murakoshi says: "We are very serious about our products - our policy is to provide the unique and the useful."

Serious enough to rake in about half a billion yen a year (£2.4 million) at the minute, it seems.

The three or four new products Thanko pumps out each month come from many sources, particularly from within.

Murakoshi explains, "We have internal meetings most weeks and employees share their ideas, so we discuss those and evaluate whether there's a good product in them, but the final decision is made by the president, Mr Yamamitsu.

"We have a mixture of original products and those bought in from outside, but we do have an R&D office in China where we manufacture our unique products," he continues.

So, given that rich background, what's the most useful thing, or the best seller? "As a series, the Goronoe line of desks has sold the most in total &hellip; many thousands so far."

If lightweight, portable computer desks made to be used while lying down can make millions, surely we're all in the wrong business - or the wrong country, at the very least?

As for the future, Thanko has designs on your wallet too. The English-language 'Rare Mono' brand will be used in a new online US store from the summer and the existing international site will be revamped for customers in Europe. You have been warned.