Japanese companies team up on OLEDs 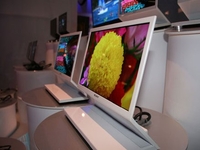 Japanese technology companies including Sony and Matsushita Displays are banding together to solve the pesky problem of OLED manufacture.

The problem with making the next-gen display is the constant failure rate of each device through manufacture, so the team-up is designed to:

A) Get to the bottom of the problem sooner rather than later, thus cutting development costs and ultimately, the price for the consumer compared to LCD or plasma, and

Help set Japan as the centre of development for OLEDs, something it is competing with countries in South Korea to do, including Samsung SDI and LG Electronics.

The government is giving 3.5 billion yen (£16 million) to the deal to help things along, which is very nice of it. Though having a display manufacture hub within its shores will obviously be a very helpful thing economy-wise.

Sharp has also thrown its OLED hat into the ring, which is interesting as the company has previously stated it does not believe OLEDs are going to trouble LCD any time soon.

Seems it might have changed its mind and doesn't want to miss the boat.