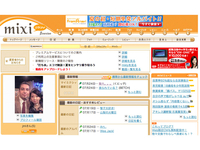 That hoary old Facebook/MySpace problem of those intellectually challenged members of the human race who wish to pose as celebrities in the virtual world appears not to be such a problem in Japan, where the biggest SNS has taken to verifying that anyone even remotely famous is who they say they are.

Mixi, which we've looked at several times before, has just announced the creation of what it dubs 'special recognition accounts' that it intends to bestow only upon those celebrities it can vouch for.

Although it doesn't explain how it plans to do so, the process presumably involves some form of official contact with the representatives of the person concerned.

Once onboard as an official Mixi icon, the star is no longer shackled by the limit of 1,000 'friends' us mere mortals have to tolerate. After all, famous people have so much more fun than us plebs, whether virtually or not, right?

Best of all for fans, anyone who starts following a Mixi star automatically gets added to their list of online pals, thereby making them feel like they actually have a life.