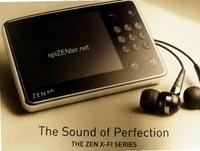 The Wi-Fi feature will allow users to stream media from Creative's 'Public Media Server' as well as being able to chat on instant messaging services such as Yahoo! Messenger and Microsoft Live!

The devices' improved battery life is also said to offer 36 hours of audio playback or 5 hours of video playback.

Stay tuned for more 'official' details from Creative on further specs and X-Fi pricing as and when we get them.