Less than half of UK people want Internet-on-the-go 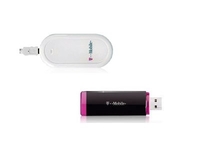 Research by T-Mobile has discovered that, bizarrely, less than half of us want to access the internet when we are out and about- although the number has increased this year.

Only 44 per cent of the 2000 people polled by YouGov think we should have access to the broadband from anywhere in the UK, with the other 56 per cent presumably happy to remain unconnected on the move.

When asked what locations they would like internet access from, 44 per cent (again) picked out their back garden, 32 per cent chose a holiday destination (cue surfing pun) and eight per cent from the pub - possibly so they can cheat in the quiz.

"Mobile broadband has reached a tipping point and is now hitting the mainstream," states Richard Warmsley, Head of T-Mobile's Internet and Entertainment services.

"Consumers are used to taking their laptops out and about with them and they expect to be connected - whether that's in the garden, at the office or in the park. Our mobile broadband packages allow our customers the freedom to do just that.

"T-Mobile's Mobile Broadband packages offer market-leading value of money - and we expect to quadruple our user base in 2008, with one in four new customers currently signing up for a mobile broadband package."