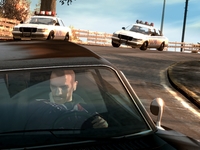 MGS4 knocks LEGO Indiana Jones off the top spot, while GrandTheft Auto 4 slips down to number three - though Rockstar's magnum opus stillholds the honour of being the fastest-selling PS3 game to date.

In the first of a number of anti-gaming stories in this week's national press, The Sun claimed this week that 'Grand Theft Auto has spoof perv site' #

TechRadar expects a response from GTA4 developers at Rockstar to this slightly worrying piece of alarmist and sensationalist tabloid coverage shortly.

Sega's Mario & Sonic at the Olympic Games coasts along, sticking at thenumber four slot this week, while perennial DS favourite Dr. Kawashima's BrainTraining jumps back up from twelfth to fifth place, following a successfulFather's day promotion.

Nintendo's Wii Fit also re-enters the chart this week, back in atnumber ten thanks to Nintendo finally managing to get some new stock in stores.