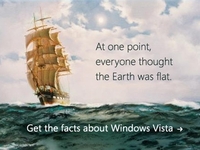 Microsoft has decided enough is enough with all the Vista-bashing on the internet, and has launched a $300 million campaign to change the public's mind.

The site itself launches into a little chat about why the OS is so good (as well as a quote from the NY Times: "Windows Vista is beautiful").

Microsoft has finally acknowledged the system has flaws ("You told us - loudly at times - that the latest Windows wasn't always living up to your high expectations for a Microsoft product") but wants you to know why it is all better now.

You must love this

Vista is a good OS, there's no doubt about that, but it seemed to get the launch version a little too bug-filled for some people's tastes, and appears to be one step ahead of the average hardware capability used in PCs.

Apple didn't really have to go through the same thing to achieve such success with its OS X, all it needed was a 'this is a Mac, this is a PC' campaign and the damage was done.

It's a sign of a system in trouble when the company needs to tell the world why it's so good&hellip;perhaps this is the reason other systems, like Linux, are catching up quickly.