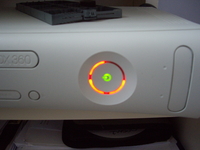 Microsoft has today responded to a number of misleading stories in the UK's mainstream press earlier this week regarding alleged 'red ring' problems with the Xbox 360 Elite console being experienced by numerous UK gamers.

Microsoft has now issued the following official response to these stories, which appeared in The Mirror and The Telegraph:

"Recent reports in the UK media regarding Xbox 360 contain inaccuracies and pure speculation, as well as news that is a year old.

"Prompted by what Microsoft viewed as an unacceptable number of repairs to Xbox 360 consoles, a year ago Microsoft announced an expansion of its Xbox 360 warranty. Effective July 5, 2007, any original retail Xbox 360 customer who experiences a general hardware failure indicated by three flashing red lights is covered by a three year warranty from date of purchase, with all other issues remaining covered by the standard one-year warranty."

Why the red ring?

So what do those evil three red lights actually mean? Many reports seem to think that they indicate a single overheating problem, but according to Microsoft, this is not the case.

"The three flashing red lights error message does not signal a single issue and can be caused by a combination of factors. For competitive reasons, we do not provide specifics about hardware components.

The statement adds: "We encourage anyone who is experiencing issues with their Xbox 360 console to call the customer support centre. Our customer service team is well equipped to ensure that all Xbox 360 repairs go smoothly."

TechRadar has contacted The Mirror, The Telegraph and a number of leading UK games retailers to find out more on the alleged 'numerous problems' with the Xbox Elite.

Both stories quote a 16-year-old Jamie King from Sussex. If you happen to know or be that James King from Sussex, then please drop us a line to news@techradar.com and tell us more about the problems you have had with your Xbox 360 Elite.