Nintendo cracks down on DS piracy on Amazon 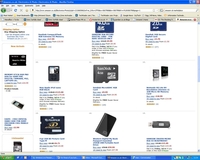 Nintendo and ELSPA are cracking down on the growing problem of DS piracy in the UK, attempting to stem the sales of R4DS carts and other similar devices, currently on sale via major online retailers including Amazon.co.uk and auction sites such as eBay.

Nintendo issued a statement today issuing a clear warning to renegade retailers: "We are monitoring the situation with R4 cards and working closely with our legal teams to identify any infringements on our IP and will take action where and when appropriate."

Somewhat worryingly, for the games industry, the R4DS is currently in Amazon.co.uk's top twelve devices in their electrics and photo section, as you can see from our screengrab to the right.

Amazon will no doubt counter any accusations of promoting games piracy with the claim that the R4DS is not being sold 'directly' by Amazon, but by traders via Amazon marketplace. TechRadar awaits official comment on the situation from Amazon.co.uk

ELSPA is also considering taking legal action against anybody selling R4DS cards, in order to combat the problems of lost sales to the games industry through the illegal downloading and sharing of DS games via P2P networks.

ELSPA's IP Crime Unit manager John Hillier told MCV: "There are various SD cards for the DS that illegally circumvent the copyright protection in place and allows copied games to be played.

"The supply of these items is an infringement and an offence under the Copyright, Designs and Patents Act 1988 and the Trade Marks Act 1994. ELSPA's IP Crime Unit works closely with the enforcement agencies to stop this supply and prevent instances of intellectual property theft."

Insiders at Nintendo have voiced concern over the legal minefield that surrounds the R4DS issue.

The difficulty in establishing a case against R4DS retailers is compounded by the fact that the cards are promoted as aids for homebrew developers.

Clearly, the retailers in question are not going to come out and state that they are, basically, tools for ripping games illegally from the internet!).

Mike Jackson, over on computerandvideogames.com comments: "Cards like these are often marketed as tools for running homebrew applications on the console, but the DS doesn't have as big a homebrew scene as the PSP. It may not say so in bold letters on the box, but these cards are popular purely because they run illegally downloaded DS games."

One UK retailer that has come under fire for selling R4DS has been Simply Games, with UK MD, Neil Muspratt telling TechRadar:

"SimplyGames.com only started selling the R4 cards very recently and I must stress that we added them to the site as a direct reaction to much larger online retailers ranging them. Since launching them we have reflected on the overall impact R4 cards will have on long-term software sales and I have talked openly to senior people at Nintendo UK about the situation.

"We have concluded that they are NOT at all healthy for software sales and it concerns me that they are now reaching mass-market status. We have removed these products from our site now and will not be ranging them (or their counter-parts) ever again."

TechRadar has contacted Amazon.co.uk and eBay.co.uk and a number of leading UK games retailers for further comment. Stay tuned for updates.