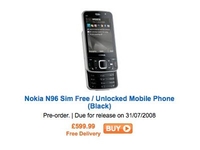 Internet retailer Play.com has begun offering the new Nokia N96 on pre-order for the princely sum of £599.99 SIM free.
The N96 is heir apparent to the N-Series throne, taking over from the massive but powerful N95.
Setting a date
The release date from Play.com is the first firm offering the industry has seen since the device was announced earlier this year, though Q3 2008 has long been mooted.
No word on the networks carrying the device, but according to the rumours an O2 sales bod accidentally let slip the device would be landing there soon.
Nokia needs to keep upping its game in the face of fierce Apple competition, and if the N96 seamlessly carries on where its predecessor left off, the Finnish company will have a very desirable device indeed on its hands.
TechRadar has contacted Play.com to confirm the device, so check back here to find the truth first.