Nokia N96 to land in September 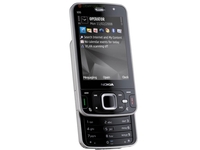 Network operator 3 has revealed the Nokia N96, the latest flagship device from the Finns, will be released in September in the UK.

According to sister site T3.com, the handset will be available on a number of contracts, including the £15 a month Mix and Match option.

Play.com has been selling the device on pre-order for a number of months, with a shipping date of 31 July, but it seems commercial availability will be slightly later.

The device houses one of the most powerful handsets on the planet, ably taking the reins from its predecessor, the N95.

An upgraded 5MP Carl Zeiss-lensed camera sits behind the new sleek, curvy body, as Nokia tries to keep consumers happy until the release of its iPhone competitor.

The handset also had 16GB memory, with dedicated multimedia keys for all your entertainment needs.

Nokia has built well on the N95's success, so when this lands it looks to be a winner.