Official: Friday 13th - not that unlucky 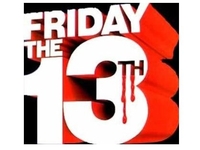 Yes, it’s that day again when things are meant to go a bitwrong. So far so good for the folks on TechRadar; the worst thing that hashappened to me was my iPod decided to play three Radiohead songs in a row, whenit was on random. Spooky.

The belief that Friday 13th is an unlucky day was debunked yesterday,by the Dutch Centre for Insurance Statistics (CVS). In the report, they foundthat there fewer accidents and reports of fire and theft occurring on this oh-sosuperstitious day than on other Fridays in the year.

Speaking about the findings, Alex Hoen told the Verzekerdinsurance magazine: "I find it hard to believe that it is because people arepreventatively more careful or just stay home, but statistically speaking,driving is a little bit safer on Friday 13th."

In other Friday 13th news, staff at London’sSpace Museum have gone on strike today overthe imposition of a below inflation pay. Which is extremely unlucky for thosewho wanted to visit the museum today. Right back at you Dutch Centre forInsurance Statistics.