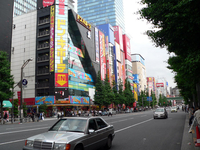 As we predicted last month, the aftermath of the Akihabara killings in Tokyo on 8 June has seen a state crackdown on free expression on the internet in Japan, including the arrest of an 11-year-old child.

Police statistics show that 33 people were arrested in the month following the attack for posting online threats against businesses or individuals.

Among the group was an 11-year-old still in primary school in the far west of Japan. The oldest person to be nabbed was 43, although - as could be easily guessed - most were in their teens or early twenties.

The typically immature postings included threats such as, "Akihabara &hellip; I want to wipe it out" and, "I'm going to commit mass murder at a station &hellip; that will go down in history."

While it's clear that such attention-seeking juvenilia needs to be discouraged, the sheer number of arrests suggests a worrying overreaction on the part of the authorities.

Also, as we've seen many times in the case of the music industry pursuing file sharers, taking legal action against children who don't follow the rules when online sets a dangerous precedent that we'd do well to keep an eye on.