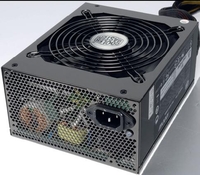 The PC playground is full of components, all vying for the title of the most important part of your rig.

Everybody has a different opinion; for some it's the processor, all that maths squeezed into a tiny bit of silicon; for others it's the graphics card, boards designed specifically to throw pixels about your panel like plates at a Greek wedding.

But where would either of those supermodels of the component world be without a compatible motherboard backing them up? Nowhere.

And that's where your PC will end up without a decent power supply keeping the whole lot juiced to the gunnels.

If you make a really bad choice of PSU, your entire rig may end up a smouldering heap at the e-waste recycling point of your local tip.

Cascade effects from faulty, or even from just under-powering supplies, can have unpleasant repercussions on the rest of the components making their home in your PC.

Repercussions such as turning your precious £350 pixel-pusher into so much molten slag&hellip;

Choosing the PSU is then an important part of the PC-building experience, so over the next few pages we'll make that choice a bit easier for you. Will you need a monolithic supply to keep that multi-GPU, desktop giant in check?

Or can you make do with something a little more conservative?

At the top end of the power-hungry PC spectrum are the gaming behemoths that AMD and NVIDIA have created through their quest for multi-GPU goodness.

While CPU manufacturers have recently changed tack from simply upping clockspeeds to taking into account the power consumption of their respective processors, the graphics arena has doggedly stuck to the quest for speed.

As such, power draw for the latest CPUs has stayed constant over the last few generations compared to their thirstier GPU brethren.

In the graphics market, the sky's the limit power-wise - the latest 9800GX2 from NVIDIA alone runs at nearly 200W. According to some sources the GTX280 just around the corner could well be around 40W higher.

Stick two of those babies in SLI and not only will you be light in the wallet, but you're going to be taxing the hell out of any PSU you plug these graphics monsters into.

And who could forget about the prancing triple- SLI show-pony? With three 8800 Ultra graphic cards sitting in a row that's 525W sucked into the GPUs alone.

AMD's offerings are a little more forgiving, simply by virtue of being less high-end components. CrossFire X with a host of 3850s in unison can be run quite happily on a 625W PSU.

If you're after the fastest 3D-gaming around though, you should spare a thought for the power draw of the incredibly thirsty top end cards.

When choosing your PSU it's also vital to take into account the possible power draw from the rest of your performance components. Your CPU is going to take anything between 35W and 130W, while the motherboard can drain up to 50W itself.

A couple of sticks of DDR2 will run you around 15W, and your drives (optical and hard drive) hit about 30W each. It soon adds up, especially when you add 5-10W for each PCI card and 5W per USB device.

Just hitting the mark though isn't good enough. If you think your 450W PSU can cope with the 400-odd watts that you've calculated, then think again.

Your setup will thirst for more at some stage and running out of power to the inner workings of your gaming rig doesn't just mean it won't boot, it might mean it won't ever boot again.

Your PC may struggle on with just enough juice for a while, but any fluctuations in the output of the PSU could seriously affect the delicate sensibilities of your machine.

If your rig's only receiving the bare minimum power then eventually something's going to give.

All the units in this test did manage to outperform their stated max wattage easily, though, so you've got a bit of leeway.

Compare that to the power supply test we carried out 18 months ago, where one of the power supplies failed to reach its stated wattage, and you'll see the change in the market.

The PSU world has become a more competitive place since those days, which is reflected in the fact that each of the current crop did exactly what it said on the box and more, exceeding both load and efficiency scores.

Aside from load, there are other differentiating factors between PSUs; the most obvious being the choice between conventional and modular cabling.

The modular PSU came about as a response to the new plugs that performance PCs needed, such as SATA and PCI-E power.

While conventionally cabled designs now end up resembling Cthulhu with the amount of wires protruding from their maws, modular supplies provide the option of having the bare minimum of wires necessary to power your rig.

The upshot of this is that the insides of your case can be far clearer, improving the airflow over key components such as the graphics card, motherboard, CPU and RAM.

The downside is that modular cables can suffer from increased electrical resistance, causing voltage losses.

This can have something to do with the quality of the cable itself and how many times it has been plugged into the socket, but the voltage you lose with the modular design is still fairly insignificant.

Another thing to look for in choosing which PSU is right for you is the rail count.

Originally, all PC power supplies had only a single 12V rail delivering the necessary voltage but, due to the increased 12V demand brought on by more powerful processors and graphics cards, supplies with more than one 12V rail have been introduced.

Spreading the power draw evenly over multiple rails for the more thirsty components provides stability to the platform as a whole, limiting the chances of overloading a particular part of the PSU.

For safety's sake a multiple rail PSU is preferable if you're going to be drawing significant amounts of electricity through it; a multiple-GPU set-up being the perfect example.

Despite these differentiating factors, many people will still look at a new PSU in terms of wattage capabilities alone.

In these more ecologically aware times of ours, however, the wattage rating is not the final word on power-brick selection.

Efficiency has become a buzzword and is a key battle-ground both in terms of competitiveness and keeping new PCs as 'green' as possible.

It isn't possible to achieve a 100 per cent efficiency rating. Due to the nature of the beast, some loses are inevitable.

Most current units, especially those from larger manufacturers, will adhere to the 80+ standard, whether they're fully logo'd up or not.

Again, just looking at the results from the PSUs we put through our test in PCF193, only the Enermax Galaxy managed to hit that 80 per cent efficiency mark and one even struggled to hit a lowly 70 per cent.

This time around though not one managed to drop below 82 per cent at either quarter, half or full load.

Looking at the results of this recent test you can see that in the half-load sector, where the majority of PC use realistically occurs, the efficiency of a modern power supply is close to the 90 per cent mark.

It's also worth noting how economical a PSU is when there's little draw on the unit. If you're leaving a machine on overnight, for whatever reason (cough... torrent... cough), then even a powerful high wattage PSU needs to be efficient while it's slowly ticking over.

Efficiency isn't just important from an energy/money/planet saving perspective either, as most of the wasted energy from a PSU manifests itself as heat.

If the supply is no good at dissipating this wasted heat then this will lead to a temperature rise within your PC; and we all know that hotter components ain't happier components.

So, the more efficient your PSU, the less cooling you'll need in your PC, the less money you'll have to spend on your energy bills and the fewer polar bears will find themselves confusingly washed up in the Outer Hebrides. Nice.