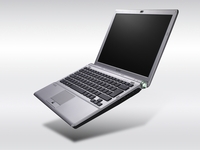 Intel has been busy of late. It's nearly-new Atom processor was launched not long ago, and is now throbbing away at the heart of sub-notebooks such as the Asus Eee PC 901, 1000H and the MSI Wind.

But Atom isn't good enough to cope with the demands of regular laptops, which is where the Centrino 2 platform comes in. The platform incorporates a processor, a chipset, and a wireless networking device on one motherboard.

The new GM45 - Cantiga - chipset at the centre of Centrino 2 allows for a maximum frontside bus speed of 1,066MHz, up from 800MHz in the previous Centrino version.

The Sony VAIO VGN-SR19VN is the first Centrino 2 laptop we've had sent in to us for an extended play. And we like it very much indeed.

It's a very impressive laptop. And while it doesn't quite reach the benchmarks that Intel claims is possible with the Centrino 2 platform, this laptop is a viable option for anyone wanting a next-gen notebook PC.