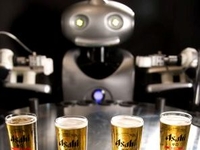 Selfridges and Asahi beer introduced the world's first bespoke robotic barman this week, causing some consternation and much laughter at the flagship Oxford Street store.

'Mr Asahi' was made using a combination of Robotics and Animatronics, and, most importantly, can serve ice-cold beer as draught pints, half pints and de-cap bottles of beer.

Mr Asahi's animatronics tech has been developed with the use of compressed air that is controlled and regulated through various valves and electrical switching mechanisms via a PC.

It took a team of eight engineers over 200 man hours to assemble the robotic barkeep. Apparently, none of them have any immediate ambitions for world domination.

We are also reliably informed by Mr.Asahi's makers that, "his arms have been built in Japan, the home of Asahi, and would rival any Gladiators in strength&hellip;he weighs a quarter of a ton but never needs to be fed!"

"Mr Asahi has been training for six months ahead of appearing at Selfridges, which will be his first official role before embarking on a national tour," Selfridges press release informs us.

While the average person has to wait almost 15 minutes to be served at a bar (apparently) Mr Asahi consistently serves people in under two minutes, "saving the average person 13 minutes at the bar - just enough time to check out your competition in the bar," the release adds.

Mr. Asahi also ships with a robotic smile and, "uniquely, Mr Asahi can reply politely to questions from his customers and stays calm under pressure."

Asahi UK Brand Manager Christian Hamilton says: "Having employed Mr Asahi and seen him at work I'm sure he'll be a great asset to the Asahi team.

"We were looking for a unique way to sample our beer as we go on our first national tour and we think that Mr Asahi will certainly attract a great deal of attention in bars, clubs and multiple grocers."

After his London appearance this week, the Metal Mickey barman is heading off on a working national sampling tour, so if you want to see him for yourself, look out for him in: