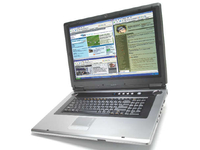 As with most gaming laptops, it's no lightweight, weighing in at a back-breaking 3.8kg. If you plan to carry this around to LAN parties, then you might also want to invest in a small trolley!

Should gamers wish, they can upgrade the Xtreme gaming lappies with a Blu-ray or Blu-ray writer.

The new Rock laptops will start shipping later in August. Final pricing is still to be confirmed. For more check out Rock's website