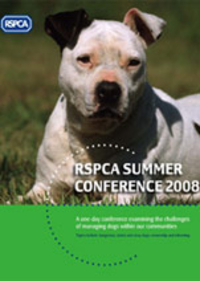 The Royal Society for the Prevention of Cruelty to Animals (RSPCA) wants allBritish dogs to be fitted with microchips, to enable the organisation to createa comprehensive database of dogs and owners in the UK.

88 per cent of attendees at the charity's annual conference voted in favour ofmicro-chipping dogs, which would allow the creation of the dog and owner infodatabase.

Irresponsible owners are to blame, not the dogs, according to the RSPCA –and a database of owners would help to police this, without recourse to animalcruelty, claims the organisation.

The RSPCA received 358 calls about dog fights in 2007, double that of theprevious year and the number of people treated for dog bites in England rose 40per cent over the period 2003 through to 2007.

"Why do we still have a stray animal problem? Why do we have anincreasing dangerous dog problem? The answer has to come down to education,enforcement of legislation and, in certain cases, microchipping and doglicensing," said David Bowles, the RSPCA's head of external affairs.