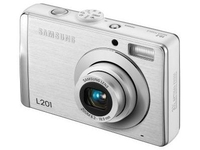 Samsung has announced two new cameras for its L Series that come packed with features and more megapixel power.

The first is the ultra-compact L201. This digicam comes with a 2.7in LCD screen, 3x optical zoom and a 2.7in screen.

Extra features include the obligatory face detection - because you need your camera to tell you what a face is - something called Auto Contrast Balance, which corrects shadows in back-lit conditions, and Digital Image Stabilisation which sorts out any jitter in your photo taking.

For those that want to make movies as well as take snaps, the L201 also comes with a movie recording mode that shoots MJPEG VGA footage at 30fps.

The second and final new L Series cam is the L301. This is the big brother of the L201 - hence the number change - and manages to cram a 13.6MP sensor into its compact body. Unless your shooting for billboards you don't really need this much imaging power, but as bragging rights go, it is pretty impressive.

Features are similar to the L201, but you do get the added Blink Detection mode which detects, well, you know the rest, and a Smile mode.

There's even a in-built Photoshop-esque filter to perk up your images. Beauty Mode will touch-up skin tones and make you look better. Great for those 'morning after the night before' images.

Filmmakers, however, will have to make do with just 20fps, but if your movie is going straight to YouTube you won't notice a bit of difference.

The L201 and L301 are out in September and will be available for £129 and £199 respectively. The L201 is available in the following colours: black, silver, pink, turquoise and lime green.