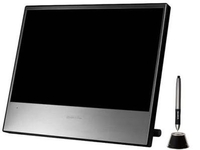 Touchscreen LCDs are not a new concept with the likes of Sanyo, Protouch and Aspect getting in on the act but they’re bigger and better brother Touchcreen LCD tablets are, especially ones that look as slender as the new Princeton PTB-TMW19B that’s just been unveiled in Japan.

You've got the touch

The Princeton has all the tech you associate with a Touchscreen tablet – a WXGA+ display, 300cd/m2 brightness – and a little bit more with pen interactivity, which is ideal for PowerPoint presentations, and handwriting recognition, for those who want to write straight on to the screen.

You do get some built-in speakers though and Corel image software and Office annotation software is bundled.

The 19in screen is set to be released in Japan in June and will retail at around 128,000 Yen (£610). There’s no news yet of when the Princeton will find its way over here, so for the mo we’ll just have to make do with our Wacom Cintiq for now.