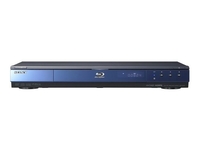 Sony has finally caught up with the burgeoning Blu-ray player market by releasing its first ever Profile 2.0 system, the BDP-350.

Well, that's not strictly true. It's released a profile 1.1 player that can be updated via a firmware later in the year - which is nearly as good.

Offering BD-Live capabilities (when they, er, go live) the player houses the latest in Blu-ray technology, meaning that no matter what disc you buy, the BDP-350 will be able to play features that use web-based functionality.

The BD player is also an upscaler, so bung a standard DVD into the tray and it will convert the signal from 480i to 1080p.

The system has gone on sale for a very reasonable $400 (£200). There's no UK release date yet, but as always, we will keep you posted.