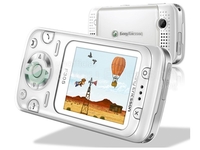 Ah, Sony Ericsson. It was less than two months ago we called you up with the best intentions, having seen the sign in your new Taiwan flagship store making reference to the F-Series.

We phoned, chipper and excited to find out about these new devices. 'What would they look like? Will they be fun?' we thought excitedly.

But our hope was dashed on the rocks of non-appearance when you told us there was no such device set in your portfolio.

So when we find out you're going to announce a new F305 gaming phone on June 17, it makes us feel sad.

Onto the phone itself, and it's hardly the device to revolutionise the industry a la Nintendo and its Wii.

For instance, the pre-loaded bowling game: you may have to bowl the ball as you would do in real life, but then surely you'd have to bring the device straight up to your face? Seems pointless without a TV, and the risk of injury is heightened.

The 'O' and 'X' keys, along with the D-pad, hint at something a bit Playstation-esque, but it's not really the much vaunted PSP phone of the rumour moors.

SE has packed on all the necessary musical gubbins we've grown to love, including expandable M2 memory, eAAC+ support, A2DOP Bluetooth support for stereo wireless listening and TrackID (which I've yet to see working properly, but then again some of us label our tracks ALREADY. We're the fun people.)

Other than that, it only works on the EDGE network, which has been deserted by Apple, and has a dinky little two inch display.

Expected to hit sometime in Q3, with no word on pricing as yet. But when we know, you'll know.