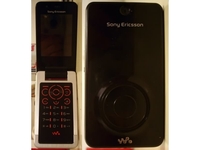 Sony Ericsson loves to bring out new phones, so much so that it carefully creates each model under a codenamed smokescreen - the Remi or Feng, for example.

It's a shame the Alicia has finally had to come out from under wraps to be known as the W707, as revealed on the SEMC Blog, as surely some would prefer something more personal rather than a series of letters and numbers.

The new clamshell design houses a 3.2MP camera along with a single speaker under the hinge, and is HSDPA enabled for the fastest of the fast mobile broadband.

This is basically a low-end version of the W980, so no 8GB internal memory, no FM transmitter, but then again they're things some people probably don't really want to pay for.

The W707 does have internal and external displays though, which should make for some decent music playback.

Another one for the collection on the 22nd July this year? Perhaps, but seeing as only four are apparently being announced, space is getting tight.