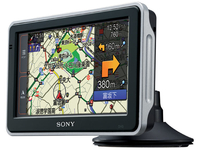 The endlessly rising price of fuel has had many predictable effects, but probably none as geeky as Sony's clever way of directing drivers to the cheapest pumps.

The Tokyo firm has mashed its PetaMap collaborative mapping service into an online list of petrol stations and their prices to deliver a location-based feed of the cheapest fuel in the area.

That can be displayed in-car on the NV-U2 sat-nav system we saw last year, making it a simple matter of asking it to select a route to the desired station for a fill-up.

If, for some odd reason, you're on foot yet still wanting petrol, the service will still work on a PSP using the Wi-Fi-locating ability that's blended into PetaMap for non-GPS devices.